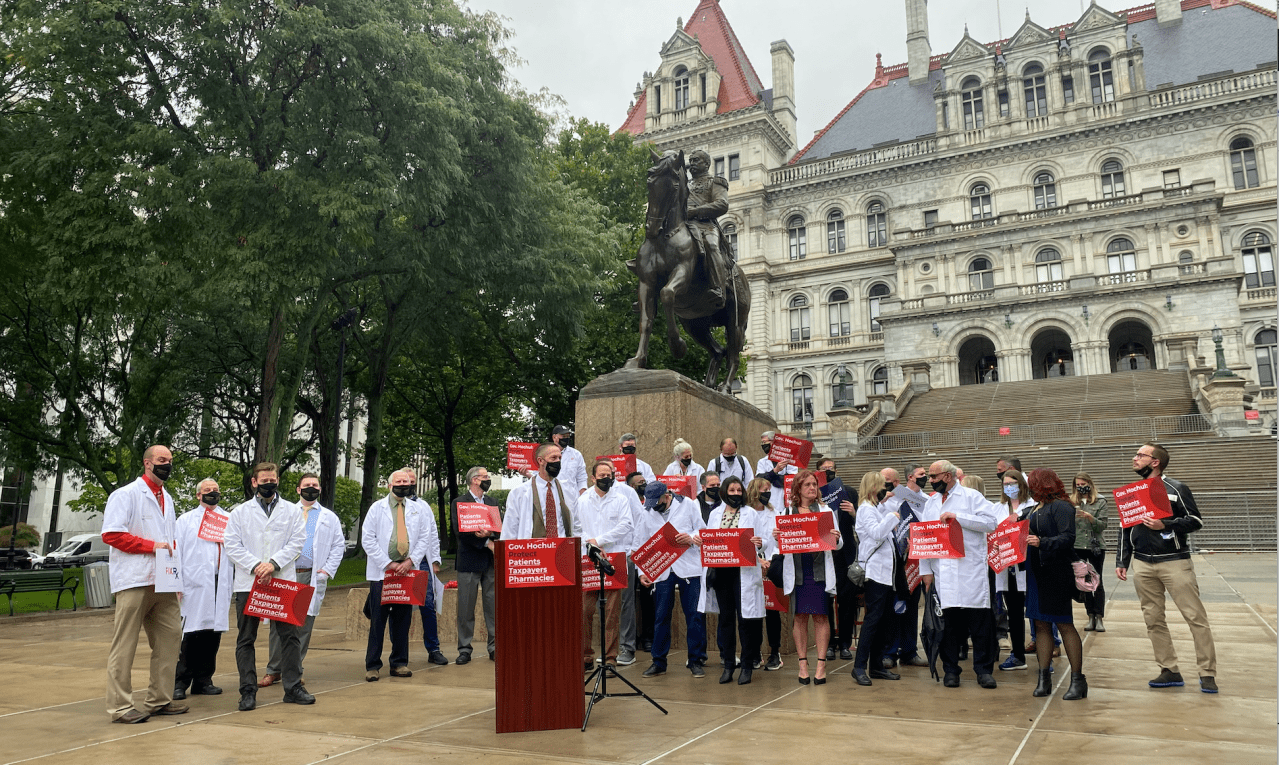 ALBANY, NY (NEWS10) – Independent pharmacists from across New York State gathered on the steps of the New York State Capitol building to call on Governor Kathy Hochul to sign on to the Pharmacy Rescue Program.

“Make no mistake; this is a battle of Wall Street against Main Street,” said Senator Mike Martucci.

Martucci co-sponsored the group of bipartisan bills that hope to “save” independent pharmacies from closure. The package was passed unanimously in June by the New York state legislature.

“The stake is very simple. It’s the survival of an industry that serves our communities, ”said Martucci.

A patient from Albany has joined the sea of ​​white coats and suits to speak out for independent pharmacies.

“It’s part of the fabric that unites us as a society,” said Robert Markovics.

Markovics lives down the street from the Lincoln Pharmacy and frequents the local business a lot, especially as he gets older. His reasoning for not switching to a big box store is simple.

“It’s like that thing in Cheers, you want to go where everyone knows your name, ”Markovics said.

However, Thomas D’Angelo, president of the New York State Pharmacists Society, said that in order to continue caring for patients, they need Governor Hochul’s full support.

“If comprehensive legislation is not passed urgently, hundreds of independent pharmacies across the state will be forced to close,” D’Angelo said.

Assembly Member John McDonald said the main purpose of the bills is to regulate the companies that manage prescription drug benefits called PBM’s — Pharmacy Benefit Managers. He said PBMs provide a valuable service, but their role in the industry has grown without regulation to follow suit.

The Business Council of New York State does not agree with the adoption of the Pharmacy Rescue package and has said the problem is “complicated”.

“An analysis of the proposed legislation could increase costs to consumers by an average of $ 2.8 billion per year,” said Lev Ginsburg of the Business Council of New York State. “Given the extraordinary financial impacts caused by the pandemic, it would be irresponsible to adopt policies that would further increase the costs of healthcare for those in need. “

Additionally, the Pharmaceutical Care Management Association, the national association representing managers of pharmacy benefits, also sent a statement to News10 in response to the rally.

“The accusations that PBMs are forcing store closures are unproductive and not based on fact,” PCMA said. “In New York in particular, the number of independent pharmacies in New York increased by 25% between 2011 and 2021.”

However, McDonald’s said the business model is not sustainable. Although PBMs play an important role, he said the problem is a lack of transparency in their role as an intermediary between insurance companies and pharmacies.

“There is a disparity between who gets what when a prescription drug is paid for,” McDonald said. “As a government we should know how our dollars are spent and, shamefully, we don’t. “