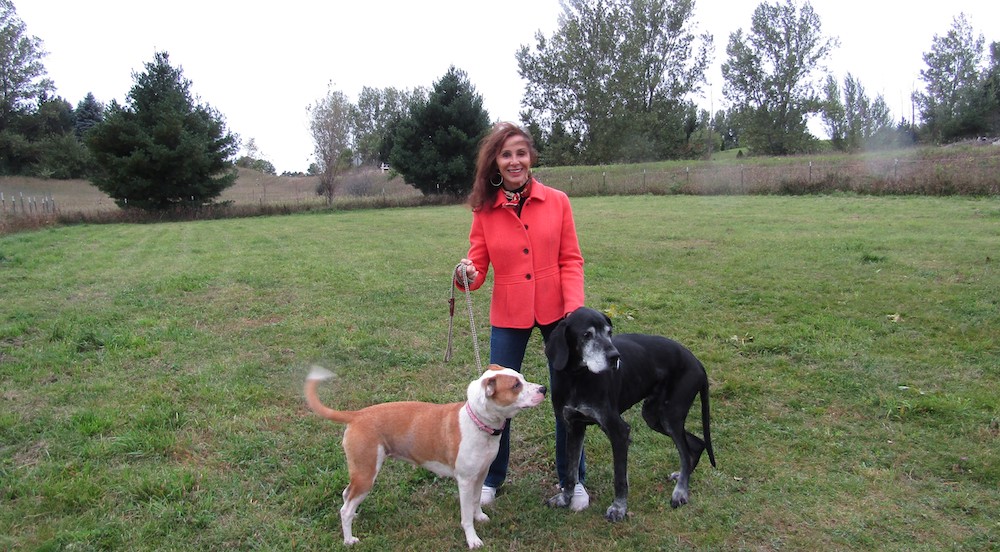 “I first saw Frannie many years ago when I was volunteering at an animal shelter in Oakland, Calif.,” Says Gottwald. “She was dragged into the shelter by an elderly man, who held his collar as he held a wooden drawer full of puppies.”

The children were throwing stones at Frannie and her puppies, the exhausted old man told her, wiping his forehead. “I chased them away and brought her to you.”

The dog mom watched Gottwald’s every move as Gottwald put his five chubby brown and black fur balls into a box. The mother was skinny and wet, but her eyes never left her puppies.

“Don’t worry,” Gottwald repeated to her over and over. “We will take good care of them.

Gottwald quickly found a name for the brave little mother. “I decided to name her Frannie, in honor of Saint Francis, the patron saint of all animals,” she says.

Frannie grew up trusting Gottwald, and the two – both patron saint of animals, one might say – developed a bond that Gottwald couldn’t bear to sever. Knowing that the puppies would have little trouble finding a home, Gottwald adopted Frannie from the crowded shelter and moved her home.

“She was mine, but it turned out that I was actually hers,” says Gottwald. “I have come to love him in a hundred ways.

Sadly, Frannie was then hit by a car and died.

“I cradled her in my arms and promised that she would not have died in vain, that one day I would make an animal shelter for all the beautiful little spirits like her who are lost or afraid, or confused and alone. ”

A PROMISE KEEPING
Gottwald kept his promise to Frannie. She now runs the Great Lakes Humane Society, a non-profit organization located on 10 acres in rural Leelanau County, where she welcomes dogs from across the country.

Its mission is to welcome unwanted animals and find lasting and loving homes for them. She also educates the public about adoption rather than purchasing a pet and the importance of sterilization. Adoptions and surrenders are by appointment only.

“We provide shelter for abandoned and unwanted animals, medical care and the opportunity to be adopted into a loving home,” says Gottwald, who received the Albert Schweitzer Community Service Award for his work with the Chicago Anti-Cruelty Society. “For some animals, our farm can be their home for life. We have heated kennels and plenty of space for the animals to let off steam and play. All our animals are vaccinated and sterilized before adoption.

Gottwald and his team have conducted more than 1,100 adoptions since the shelter launched in 2010. The place relies on a group of six to eight dedicated volunteers to help.

“We’re helping these guys get back to balance, so they can get along with other dogs and with other people,” says volunteer Tom Wilcox, a 69-year-old retiree who helps at the shelter almost every day. days for almost two years. “They don’t get enough exercise, so you have to get them outside to purge themselves of that energy.”

Wilcox, who retired from Flexsteel after 44 years, is at the shelter just after 8 a.m. Monday through Friday.

“My goal is to make sure they eat,” he said, snuggling up to a brown pit bull who appears to easily have 80 pounds of muscle. “I feed them for breakfast and take them for a walk. Then we will do a leash training so that they learn not to jump. We are working on all of these things.

LOVE, EXERCISE, ATTENTION
Many dogs arrive damaged, according to Judith Knupp, who initially stopped by the shelter to adopt a dog and has now been volunteering there for about five months. She stops every Tuesday and Thursday to walk the dogs and help with whatever is needed to make them feel comfortable and loved. “They arrive sad and confused,” she adds. “They don’t know why they’re here.

Pit Bulls are the most common dog breed in the shelter, but Gottwald comes in all shapes and sizes. She collects some from the owners who can no longer take care of their animals, while others are dropped off at the shelter. It has even hosted street dogs dispatched to the country from Pakistan and Egypt, and some other rescue groups.

“We will take any dog ​​without asking,” says Gottwald. “Any dog ​​can be a good dog – they all just need attention.”

Funding for the operation of the shelter comes from several sources. There is a fee to adopt dogs, of course, and donations are always welcome. Over the years, they’ve won a number of animal lover and organization grants, including $ 3,000 – twice – from Hollywood star and acclaimed animal rights activist Doris Day, founder of Doris Day. Animal Foundation, and $ 5,000 in Playboy founder of the magazine, Hugh Hefner.

Gottwald also hosts a barn sale every spring to raise funds locally. She plans to build a new barn and raise cattle. She’s always on the lookout for more volunteer help, especially a type of handyman who could help with some projects.

MORE:
READ MORE TAILS
Linda Gottwald wrote “Once Upon A Shelter,” a heartwarming collection of stories based on the adventures she experienced during her years as a shelter manager. It offers a unique view and insight into the connection between animals and the human condition. It’s priced at $ 20, including shipping, and the proceeds help fund GLHS.

BY THE NUMBERS
Did you know?

63.4 million American households own at least one dog.

50% of the American population owns a dog.

85 percent of owners consider their dogs to be pets or companions.

1% of owners consider their dogs to be their property.

78 percent of owned dogs that are spayed or neutered.