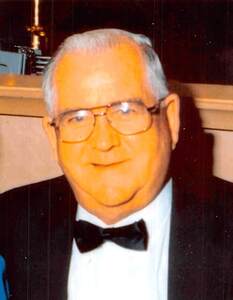 Howard Herbert Hansford of Valdosta, GA died of natural causes at the age of 94 on January 2, 2022. Mr. Hansford was born in Alameda, CA on February 27, 1928 to the late Walter D. and Beatrice M. (Kennett) Hansford .
Mr. Hansford was a World War II veteran serving in the military. He retired from Naval Air Station Alameda as a planner estimator after 37 years of service. After retiring in 1983, Mr. and Mrs. Hansford moved to Valdosta GA (where Mrs. Hansford was originally from). Mr. Hansford worked at Saft as a supervisor and then worked at 1st America Drugs for 20 years as a delivery driver. Mr. Hansford was also a volunteer with the East Brooks Fire Department for 30 years and chaplain of the American Legion Post 13 for 14 years.
Mr Hansford met his beloved wife Linzie (Brady) Hansford at the USO in Alameda Ca and proposed after 3 days. They married on Christmas Eve on December 24, 1948 and celebrated their 73rd birthday this Christmas Eve on December 24, 2021.
Mr Hansford is survived by his wife Linzie, his daughters and sons-in-law, Vicky & Paul Harrison of Montverde FL, Beatrice “Pixie” & Allen Stanford of Newcastle OK, 6 grandchildren, 9 great grandchildren and 1 great -great-granddaughter, and was proceeded to death by his daughter Barbara Kelly.
A funeral service will be held at 11:00 am on Thursday January 6, 2022 at Sunset Hill Cemetery. The family will receive friends from 5 p.m. to 7 p.m. on Wednesday, January 5, 2022 at the funeral home. Mr. Hansford was passionate about animals, especially cats. In lieu of flowers, the family is asking for donations to be made to DARE Animal Rescue, Valdosta GA www.dareanimalrescue.com. Kind words and expressions of sympathy can be left with the family at www.musicfuneralservices.com. The Hansford family are served by the professional and caring staff of Music Funeral Services of Valdosta.